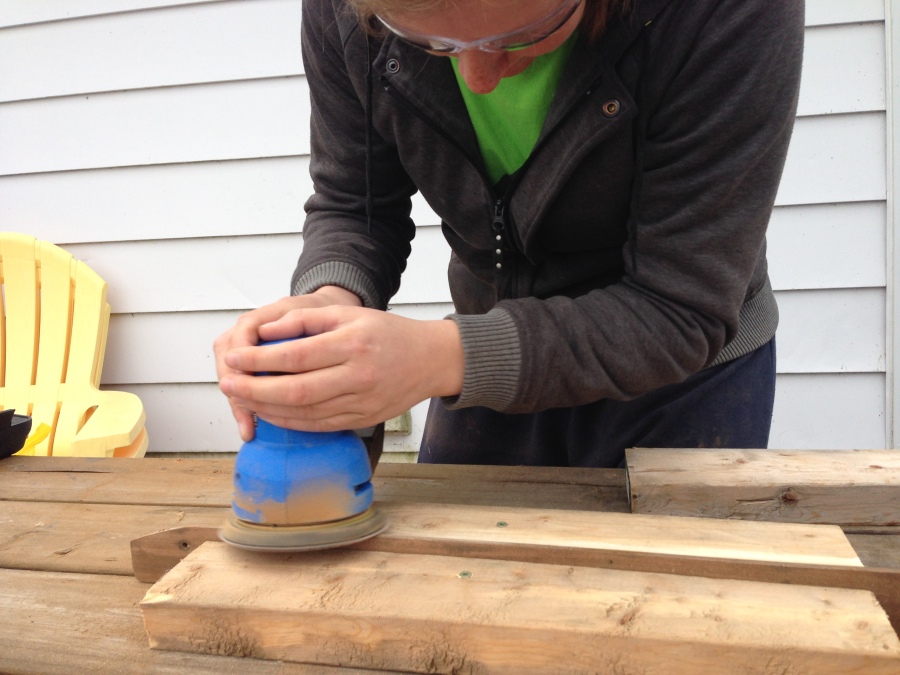 In my eagerness to explain the hard work it took to solve the Zebra Mussel habitat that had become the hull of Tallulah after the first summer, I did forget to mention a few small jobs that were completed that winter.

I decided that it was necessary to have some curtains made for the windows on Tallulah to help reduce the temperature in the cabin and provide some privacy when anchored out for the weekend. There were some very seventies curtains in the front vee berth area when I purchased the boat; and if the questionable ivy pattern wasn’t enough to make me want to tear them down, the black mold spots certainly did the trick. This is the only picture I have that gives you a little “snipit” of the old curtains. 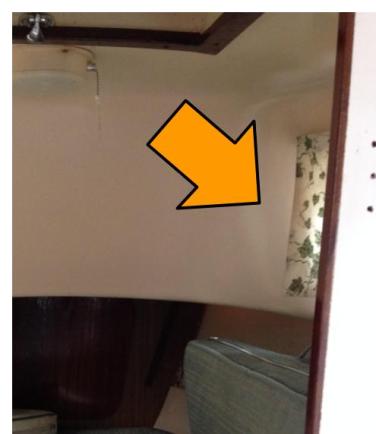 So I squeezed my way under the multi-coloured tarp job that was on Tallulah that winter, and did some measuring and drew up a quick diagram of the window layout inside the cabin. 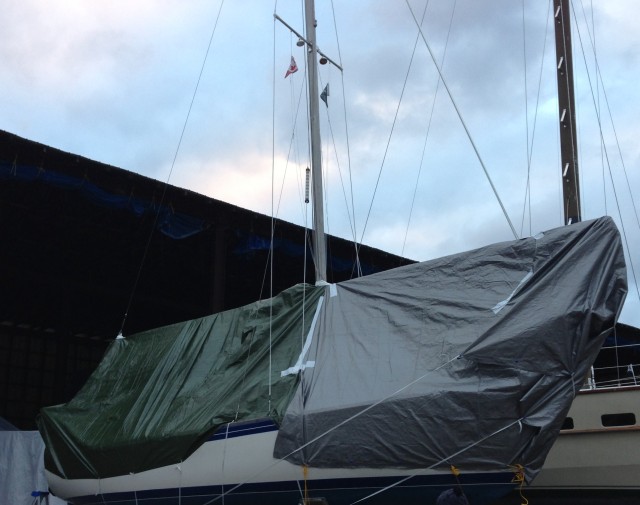 The tarping job after it was completed in the fall, notice I forgot to take my flags down…

I picked out some nautical themed fabric at Fabricland, borrowed an old sewing machine and put my limited sewing skills to the test. The final product turned out quite well surprisingly and I even made a little pillow to match. 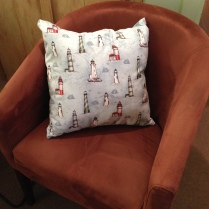 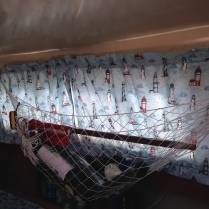 The curtains have been up for two summers now and are still going strong, but I will say they are a bit annoying to open. They do however, definitely keep the cabin temperature much more bearable and it isn’t quite as blindingly bright in the morning. They are just attached with some curtain wire and eye hooks, which was extremely easy to install. One task that has become pretty much impossible with the addition of the curtains is popping my head up while in the front cabin at night to check my surroundings and make sure the anchor hasn’t slipped. Making the curtains so that they can’t really be opened in the front cabin may have been a slight oversight on my part, causing me to have to get up out of bed to look out the companionway to satisfy myself with the security of the anchor. This may however be a problem less noticed once the new Rocna Vulcan 12 is installed on the bow this spring, as this anchor is meant to hold boats weighing 8 tonnes it should have no problem holding Tallulah at less than 3 tonnes.

The other task that I completed during the winter was the sanding and oiling of some of the teak wood work which I removed from the boat in the fall. Since I didn’t have a garage at this time I spent many hours sanding on the front porch in the warmer days of March, that were realistically still freezing cold! 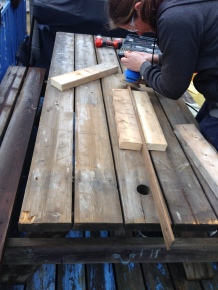 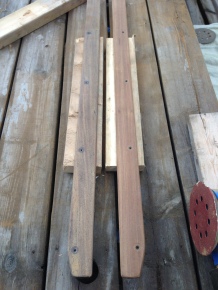 For the handrails that line the cabin top on the way up to the bow, I sanded them by hand and then used a two step teak restorer to try and bring out their original colour. This did seem to help some, though I am pretty sure these handrails are not teak so the results were not as great as I had hoped. 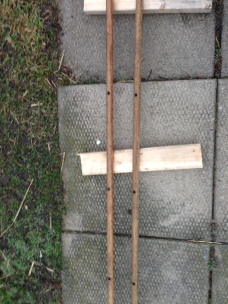 Then I brought all the sanded and treated pieces of the teak into the house; where I scrubbed, washed and let them dry in the bathtub. This may have been a bit unorthodox, but the weather was too cold to turn on the outdoor taps still, so I made do with the only option I had. 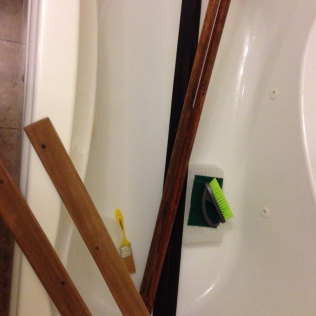 Finally I turned the counter above the washer and dryer into a workbench and laid the teak out. I spent about a week applying coat after coat of teak oil, and the woodwork looked amazing by the time I was done. 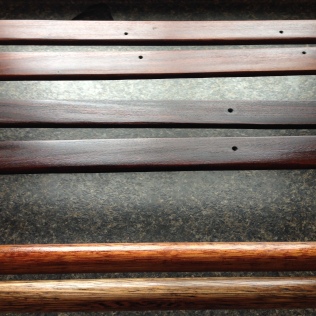 Too bad the results were extremely short lived once the wood was put back on the boat and left in the elements. I chose to go with teak oil to avoid having to sand thick, hardened layers of varnish down the road when it was time to reapply. However, it seems almost impossible to keep up with the amount of oiling required to keep the teak looking like it does in these pictures. I think I oiled the teak about 4 times that summer and it never looked nice and dark like it does in these photos. I may have to revisit the teak project again down the road, maybe varnish is the way to go? What are your thoughts?

And with two more small jobs down that brings me to Sailing Lesson # 5: If you can remove part of your boat and bring it home to be worked on over the winter, it is almost like you have extended your boating season… Okay not quite, but it does save you valuable sailing time in the spring and summer!

Next week I’ll discuss some more completed upgrades, as well as give a list of all the things I have bought secondhand, found or been given for Tallulah over the years that have helped me to keep costs as reasonable as possible!

5 thoughts on “The Little Things”

I am sure this list will continue to grow! Leave comments on my blogs or messages through the contact tab with any tips you have for these jobs.