Tallulah first hit the water under my ownership on May 2nd, 2015,  and looked a bit odd bobbing around in the water with her bubble shaped cabin top and no mast. 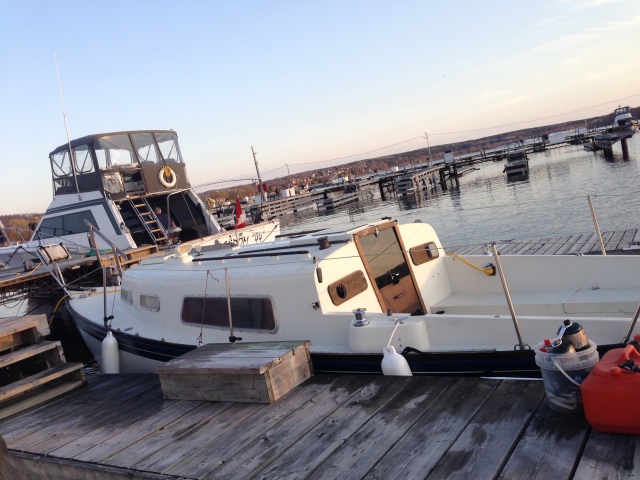 I made it through the first docking into the slip with minimal trouble (unlike the second, as I mentioned in the previous post) even though the engine did cut out after being in reverse and throttled up for a few seconds. That being said I did have some people both on board and at the dock to catch me.

The next time Tallulah left the slip was May 12th to, “put the stick up” as some would say. Since I was working at the marina at the time I got to be very hands on while raising the mast which was awesome! The mast was lifted with the marina’s boom truck and set into place with ease (this spring I will be lowering and raising the mast using a gin pole, please leave me any tips you have about this) and before long I was back to my slip and eager to try setting up the sails. 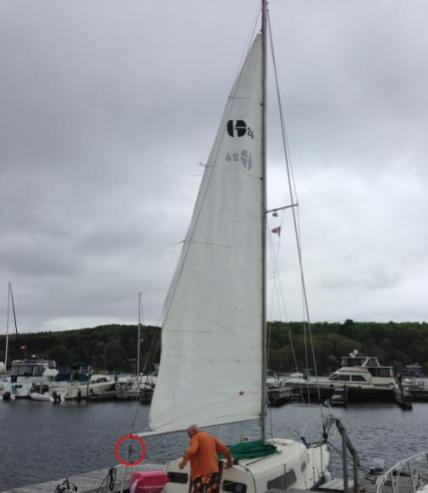 The main sail was raised first, and went up pretty easily as my dad and I guessed what went where. It wasn’t until almost two summers later that it was brought to my attention while sailing with a much more experienced sailor than myself, that the cam cleat on the mainsheet was upside down…

We had set it up with the locking cam cleat on the top near the boom, (see the red circle on the picture) so when the boom went out to the side, so did the cam cleat. It always seemed a bit annoying to me, however, it never occurred to me to just connect it the other way with the cam cleat on the bottom so it stayed easily accessible in the cabin while sailing…Ahhh that makes much more sense!

Putting up the headsail, which I believe at the time would’ve been classified as a Genoa, was a bit more interesting. It seemed like things were going smoothly and the sail was almost up then a click, and the sail was down and only the halyard was up. So I grabbed my rock climbing harness and a borrowed Bosun’s chair, tied myself in (using climbing knots- a figure eight) and I was headed up the mast to retrieve the stranded halyard. Climbing (I say climbing, but really its the person on the winch doing all the work, thanks dad) the mast ended up being a common occurrence in the first few months the boat was in the water unfortunately, and I can’t remember which trip it was but I did manage to get this great picture!

Now back to the headsail, I’m not sure if its a common problem but the little clip on the sail which has a pin that you pull to release it, just popped loose and that’s why the sail fell down. This problem has never happened again thankfully but it was a bit odd. Anyway, we fed the sail back through the track of the furler and up it went. The fun wasn’t over yet though, without realizing it we had wrapped the wire halyard around the furler several times while trying to furl the sail in. We then learned that the halyard has to be quite tight on the headsail in order for the sail to furl in properly without causing this problem. So the wire to rope spliced halyard which I have never really liked the idea of anyway, has remained kinked. This is why replacing this halyard and the sheave with an all rope option is on the job list for this spring when the mast comes down. After we got that sorted out, and I hand fed several amounts of the furler line through the drum, as not enough was in there in the first place (rookie mistake) the sails were finally up and Tallulah looked like a true sailboat! 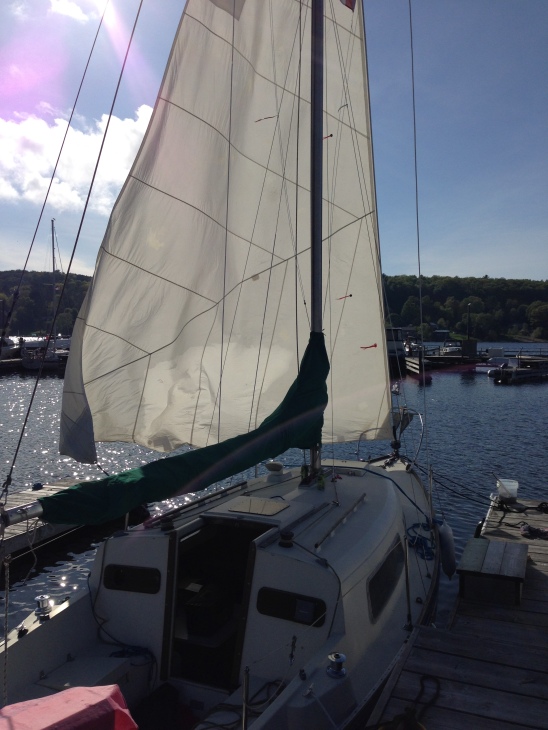 And with that I had sailing lesson #2: Tighten the headsail halyard good and snug before trying to furl it in, and always be prepared to head up the mast!

I am sure this list will continue to grow! Leave comments on my blogs or messages through the contact tab with any tips you have for these jobs.